“Hunting for pictures in the street”

The photographer’s hunting grounds are the streets, his weapon is the camera and the quarries are moments, captured quickly and with the right view for special and interesting situations. There are not any rules, you do not have to speak to those people you are going to photograph, no artificial lights are needed nor is a prepared setting necessary. Street photographers do not need a lot of special equipment, the snapshots are waiting in the streets, you just have to be open-minded and keep your eyes open for possible pictures and moments. Every situation you see outside has never been like this before, the world is always changing and you never shoot the same moment.

Nowadays, photography is accepted like an art form. Street photography is the challenge to recognise artistic and maybe theatrical all day situations and try to capture them. But problems arise if you look at would-be candid street photography in detail. What is real and what is staged? Some photographs seem to be modified. Nevertheless, the space between authenticity and staging is the grey area where much of the most interesting pictures are being taken. In our modern days, our community and our way of living makes the city an “image theatre” and this affects the way photographers act on the streets.

Anyway, it is not possible to capture every moment you see and this is what makes street photography so interesting. The picture shows a split second but you do not get detailed information about the people and the current situation. What comes afte
r this split second and what was before is not known. The viewer can create an own story around this moment, it is all about his or her own imagination, capability, fascination and fantasy. Everybody sees another story in the same picture.

There are no limits if it comes to street photography, neither global bounds nor temporal ones. This evokes the illusion of the photographer as a global streetwalker. The world is beautiful, you just have to have the view for natural light situations, architecture which forms a symbiotic relationship with nature and human beings bustle around through all this already given stage.

In addition, the relationship between the photographer and the photographed person plays a huge role in order to get the perfect picture. A picture in which the person is aware of someone taking a photo of him and there is maybe actual eye contact has a different story than if the person does not recognise the photographer, because he is hiding. Some people start to pose or to smile if they realise they are getting photographed but other people resist and reject the photographer by looking down or taking another path. This slight difference is part of our modern society.

Another important factor is spontaneity. A street photographer cannot plan a picture, he has to welcome the moment and react to whatever is happening around him, no matter if it is what he aimed to do or expected. It could although have a very staged character and appears artificial and theatrical.

So is there a difference between documentary or rather street photography and staged photography? Street photography is not only observation. The photographer always has the decision to capture the moment or not, he could move the camera and try the same detail from another perspective or another picture section. He has the possibility to choose the place, the time and the people he wants to photograph. If you look at staged photography you can recognise similarities. The photographer is always the director of his picture and it does not matter if it is a highly detailed and constructed scene or if it is just the street as a stage. He has a lot of decisions to make. So finally I would say, every picture is a decision if it is worth it or not. That makes every photographer a manager of his own photograph. 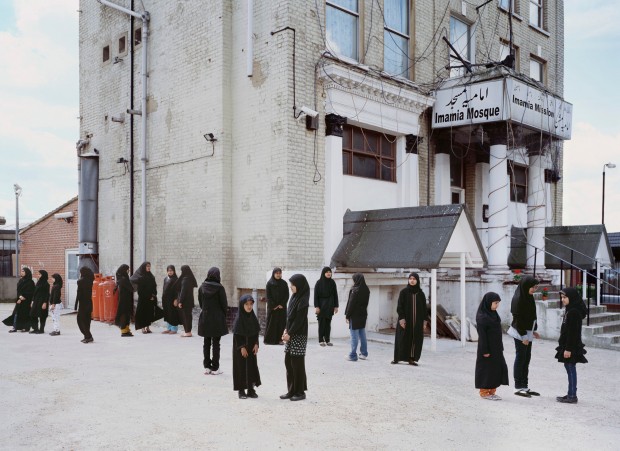 Mitra Tabrizian, from the series Another Country, 2010

1 thought on “REVIEW: DAVID CAMPANY – ALL THE WORLD’S A STAGE”