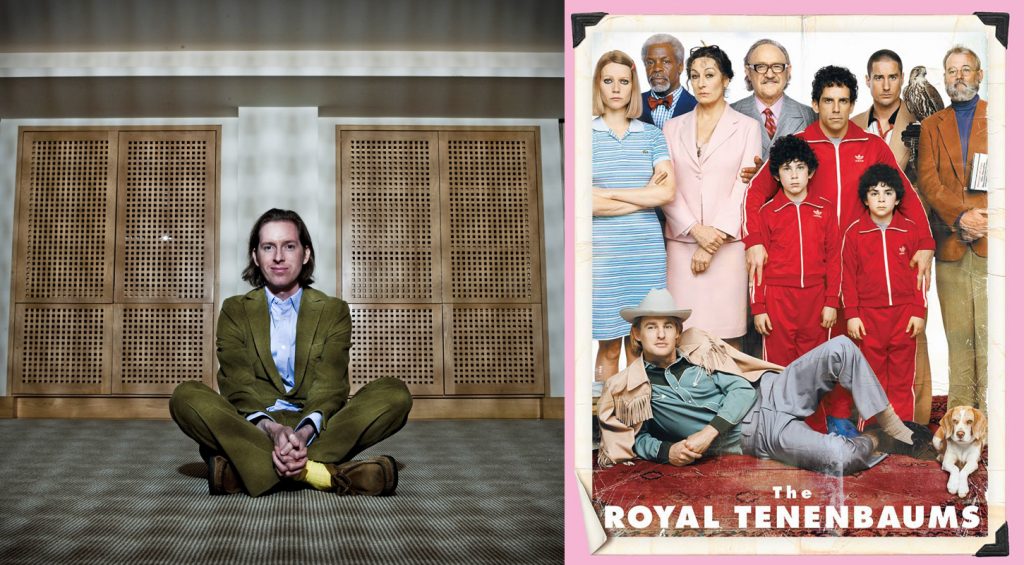 Wes Anderson is an American film director who is known for his fleet-footed, unique, bizarre and humorous film productions. In 2001 he publishes “The Royal Tenenbaums”, an absurd tragic-comedy about a family of geniuses who fail and struggle with themselves. The development of the family dynamics and the destinies of each individual member in connection with the other members is shown in a colourful, ironical and quirky film which is more an overall artwork. The impressive characteristic of Andersons films is the detailed staged structure of every scene in context to the plot. You could stop the film at any time and get a highly detailed and perfectly structured film still which could be a photograph. This is the reason why Wes Anderson is not only an artist you have to know if you deal with film production, he is although a great example for staged photography. 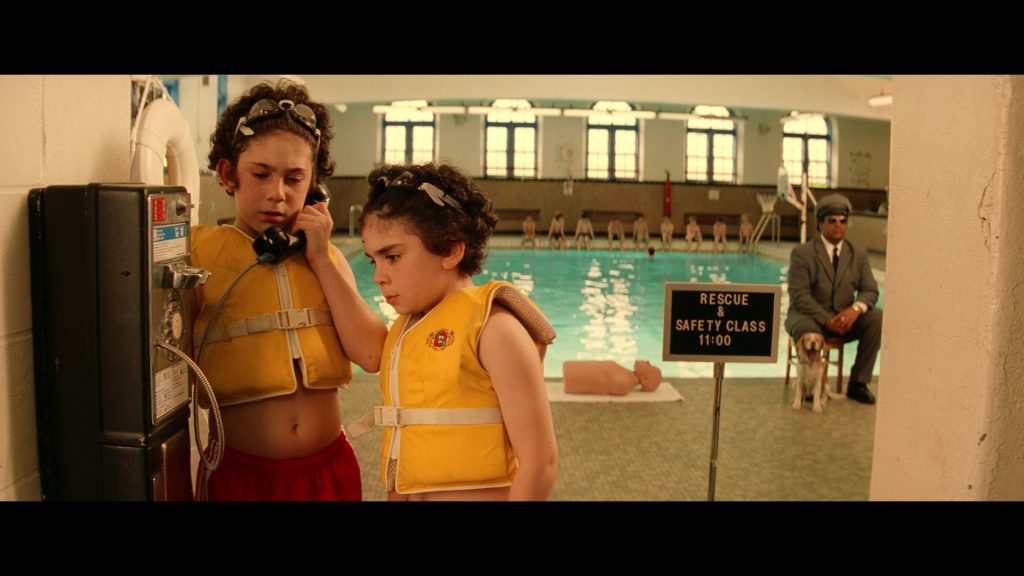 If you look at this scene in the swimming pool you could look at a highly detailed and structured scene like a photograph. In the left foreground, you can see the sons of Chas and in the right background a group of children sitting next to each other at the pool. In the middle ground sits a security guy straight on his chair and looks after their dog Barkley. The sign “Rescue & Safety Class” shows that Chas cares about his children and tries to teach them how to act in several dangerous situations. The dummy on the ground supports this fact. 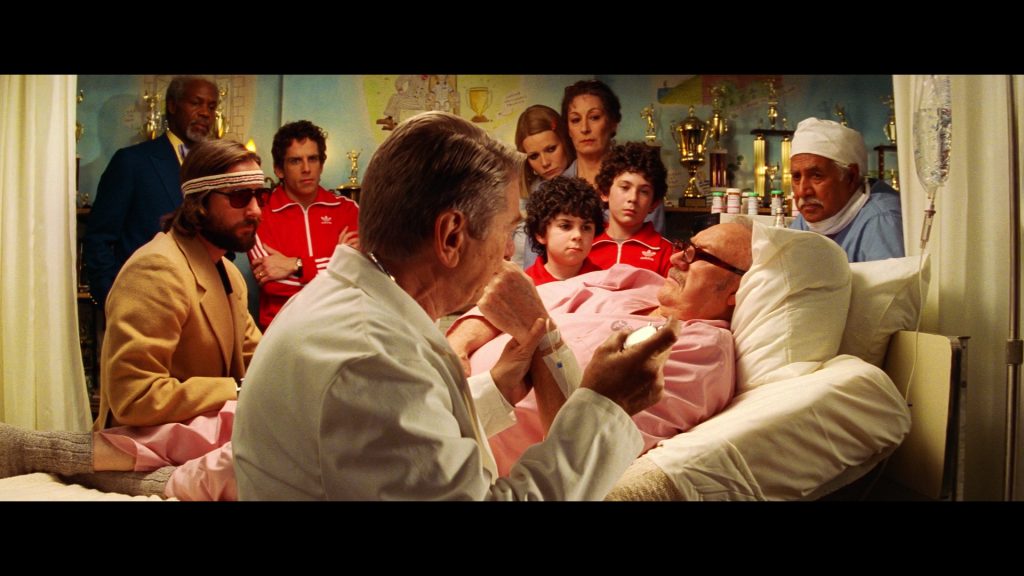 First the focus is drawn to the compositions, Anderson uses to show family relationships. At the beginning of the film, the whole Tenenbaums’ family is separated and do not have a lot of contact anymore. With his deception of his deadly disease, Royal brings the family back together. With the thought that the father is going to die, the whole family get together at his bedside. They are all on the same side which shows the restored cohesion. 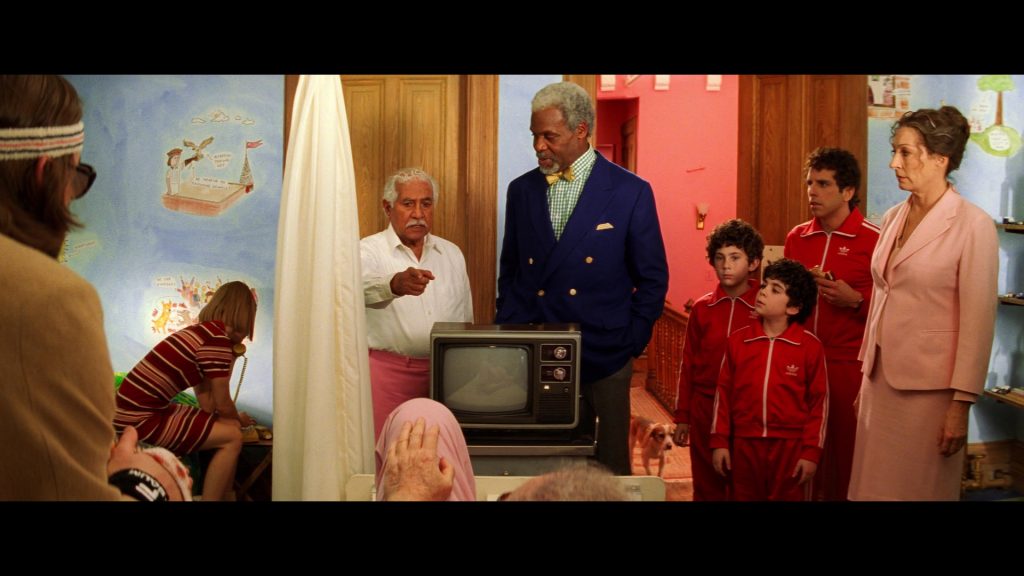 After the family found out that Royal is actually not sick and only acted like it to get the attention and the love of his family, the group is split. Richie is still on the side of Royal while the rest of the family is disappointed. Margot has a special role, she acts like it does not interest her at all and is on the phone while turning her back to her family.

In the end, Royal reunites his family again at his grave and everyone grieves together and thinks about the time they had with their father. New relations formed for example Margot and Richie as a couple. The structure how Anderson arranges the family shows a lot about the story. It is very visual and easy to understand for the viewer. 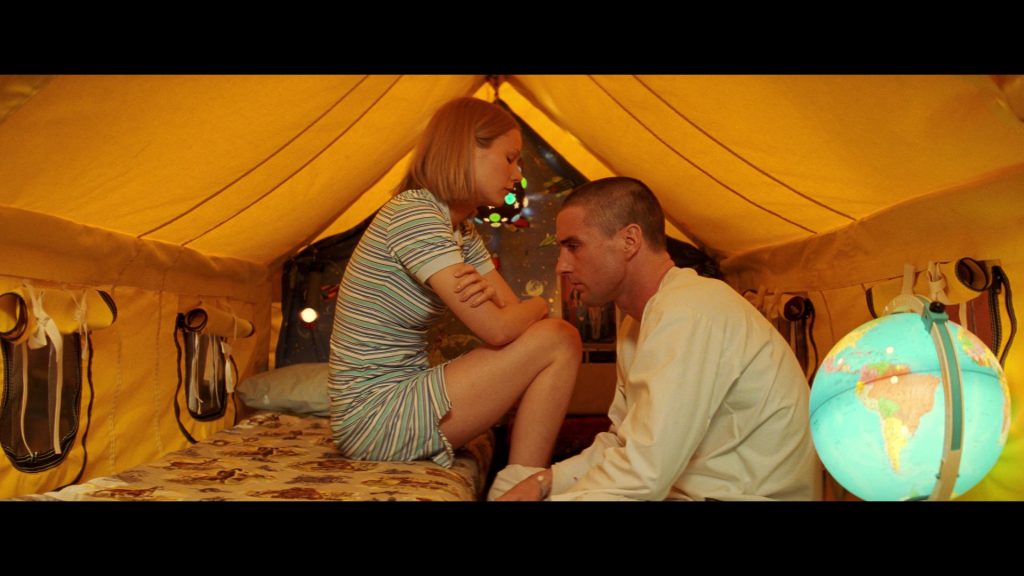 The love story of Richie and Margot is descriptive shown in the final reunion in his tent. Their bodies complete each other and build a whole circle.

The next significant characteristic of Anderson’s film productions is symmetry. He shoots scenes in perfect symmetry to highlight the focus and create a harmonious image. By breaking this harmony intentionally, he emphasises the main features. 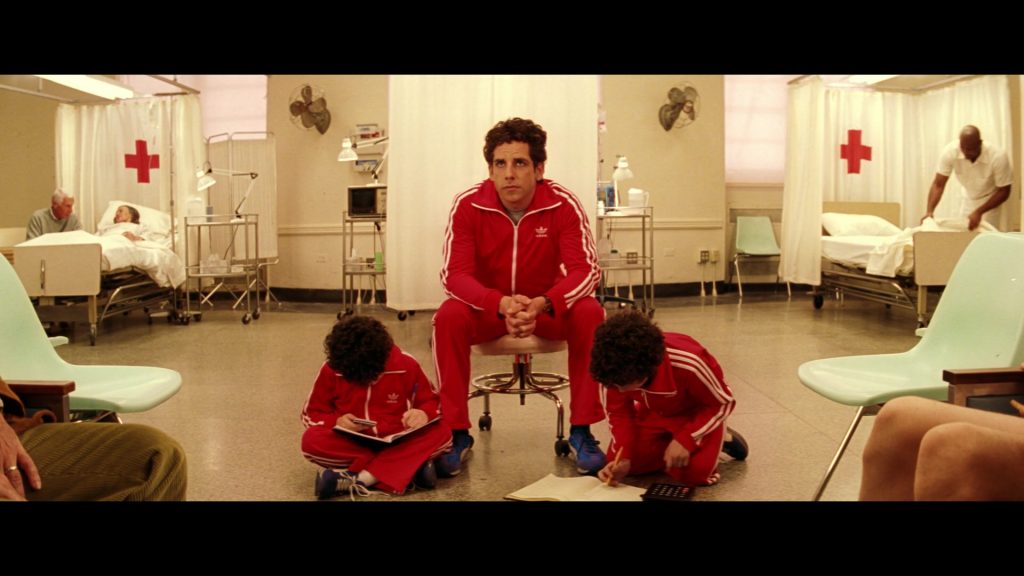 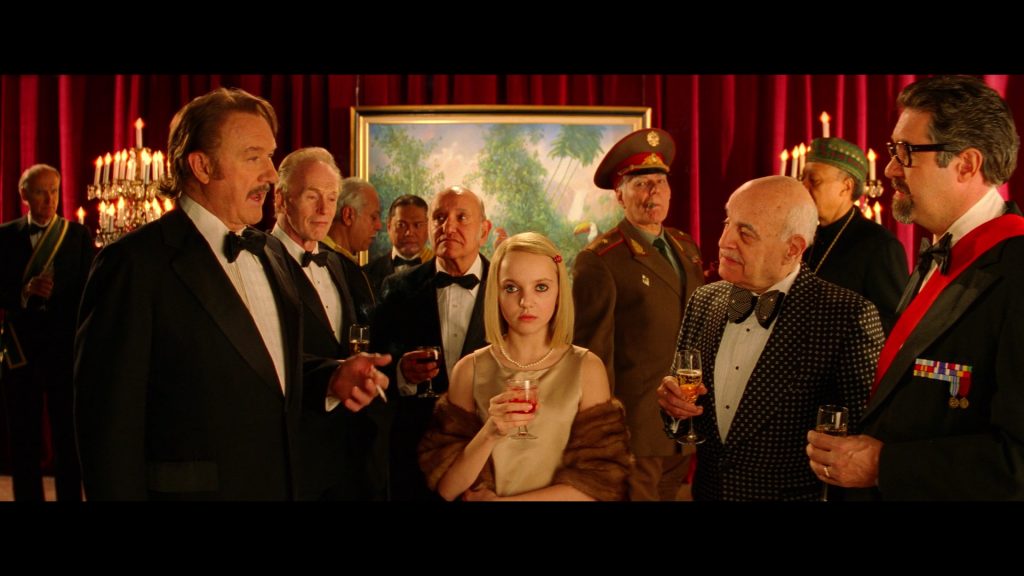 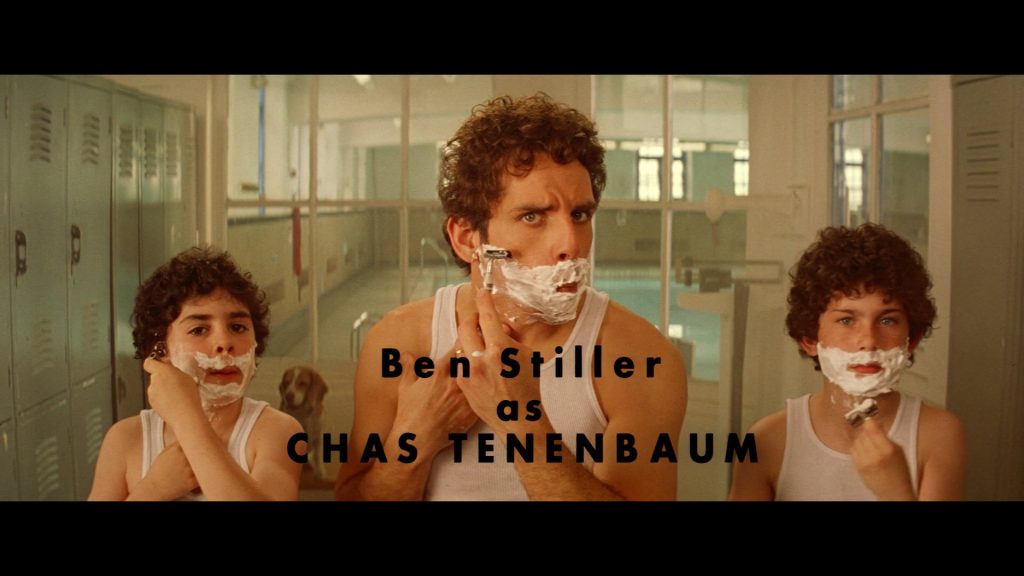 Another characteristic of Anderson’s way to create his films is the use of colour. The saturate is always very high so the colour scheme is colourful, warm and bright. Through repeating colours he creates a harmonic structure and the eye of the beholder can discover the scene better. 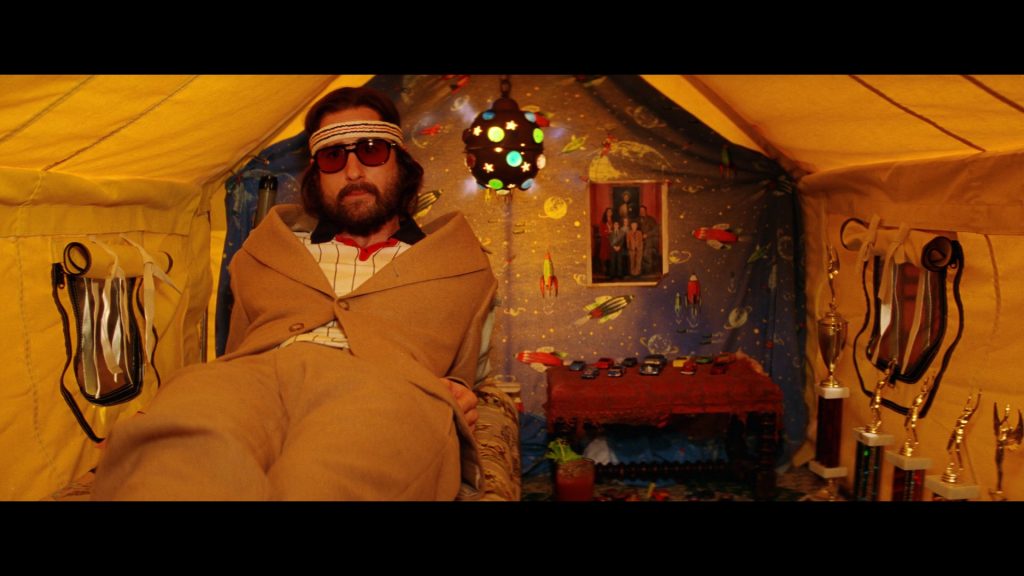 Richie is the son who attempted suicide. In his tent, he found a comfort zone with all his objects of value and meaning. The scene in the tent is very warm with a lot of yellowish tones. The viewer sees that he hides himself from the outer world to be alone in his comfort zone. 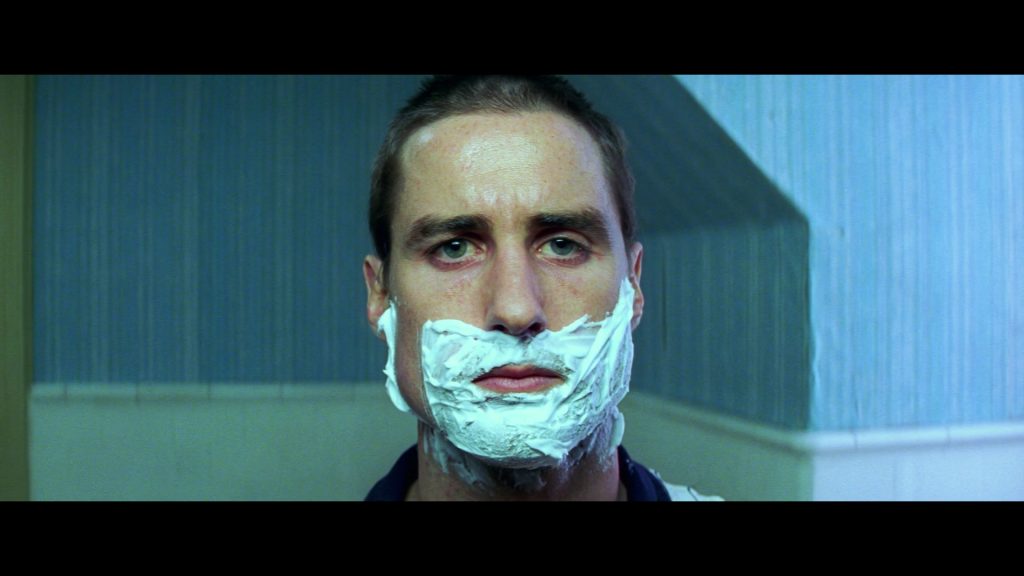 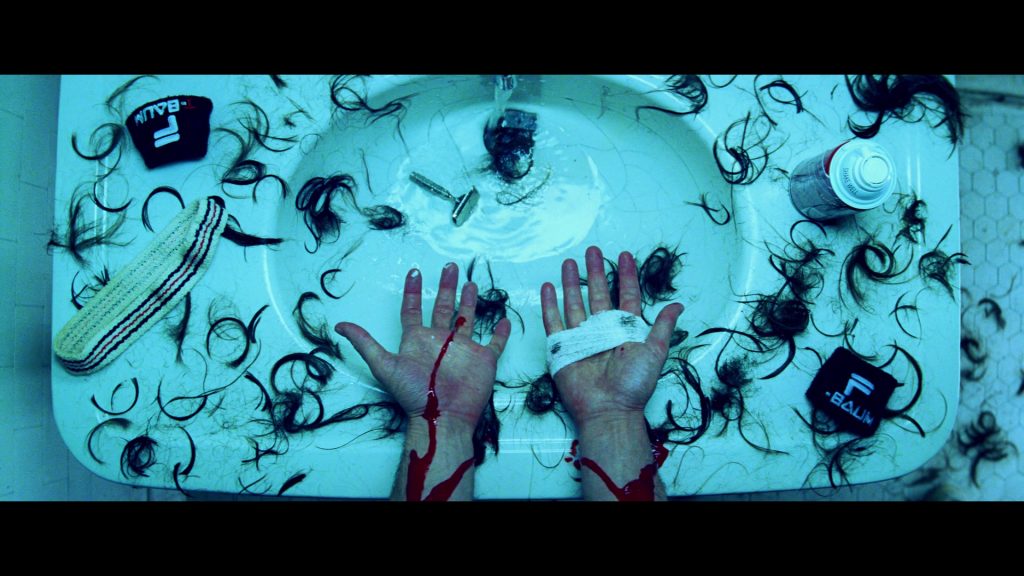 As he attempted to commit suicide, the colours are bluish and cold. There is a lot of negative space around him. He feels empty inside and lost all his hope. The red blood builds a contrast to the blue ambiance. With this use of colours, Anderson communicates feelings and emotions.